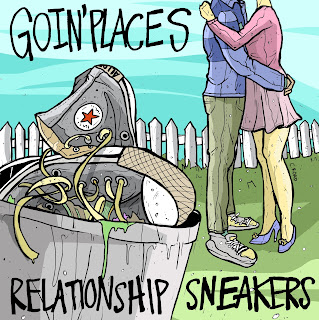 Goin' Places are one of those bands where you right away know who their major influences are. This record is full of snotty pop punk anthems, constructed for and by fans of Screeching Weasel and The Queers. It's not the most original album to ever happen, but it's definitely a lot of fun, pretty funny, and definitely catchy. A few songs into the album 'Relationship Sneakers', you pretty much know what Goin' Places are all about, and you've probably already developed your opinion on the band. Take it for what it is, or don't. I don't run your life.

The record kicks off with what is probably one of the most The Queers sounding songs in the world...other than songs written by The Queers. Well, actually it kind of surpasses some of the Queers songs as far as sounding like The Queers goes. It's even titled "Be With Me". Pretty pop punk. And partway through the song, there's suddenly organ parts. What the hell? I guess it's to make the listener feel as though they're at a hockey game. Right?

The title track "Relationship Sneakers" is pretty much one of the silliest, yet best things I've ever heard. It's just a simple song about the dude's girlfriend buying him new shoes and clothing to replace his unbecoming pop punk guy gear. This song takes an interesting direction towards the end with this cool vocal part where the backup vocalist was repeating every time the lead singer sang "night", but it kind of decides to head back into the standard formula with another iteration of the catchy-as-fuck chorus.

The rest of the album is littered with simple-yet-genius pop punk songs in the vain of  Mr. T Experience, The Ergs, and whatever else you can think of. But, I see it as a good thing. It's a fun album that I can see myself listening to a shit load, but I can also see that annoying the shit out of my friends who lack the same penchant as I for this sort of thing. So I guess this is one of those polarizing albums where you'll probably either like it or dislike it, love it or hate it. Whatever. I think it's cool, and if you do you should probably go over to their bandcamp page and check it out. You can stream it for free, even. You're all set.

Check out of facebook page.
Comment below, dear readers.
Posted by Idle and the Bear at 1:28 PM

Idle and the Bear
We're two super close friends from Ohio/Kentucky. The bear is a bear and Idle is a dork. We mostly talk about stuff we like. Because we don't want to listen to shitty music.

Sites and Blogs we love!

Search for something we reviewed